Sloth, Klinutus, and I did a ride organized by the Linn Conservancy yesterday.

We had a guide who told us all about the Buffalo Valley Rail Trail, including some of the future plans for it. From memory:

The scenery was nice.

We rode down the Rail Trail to the Eastern trail head, then back to Vicksburg to talk about the new trail head they want to build there. Then, we turned down Hoffa Mill Road, to see the mill. The mill is apparently still powered by undershot water wheels.

This technology will come in handy during the zombie apocalypse.

After we checked out the mill, we completed the loop back to the Dale Walker House. Sloth and I promptly headed to Ard’s for some non-paleo dinner.

There were a lot of side roads, farm roads, and other interesting things we didn’t get to explore, but I have a feeling we will on future excursions.

I have many more photos in my Gallery, in case you are a person who likes photos.

Sloth and I did our annual fall s24o this past weekend. I was not feeling up to large amounts of miles or hills, so we decided to rail trail it. Stony Creek, to be specific. Sloth was feeling adventurous, and rode the whole way from his house. I drove to the rail trail to meet him.

When I pulled in, this is what was waiting for me. 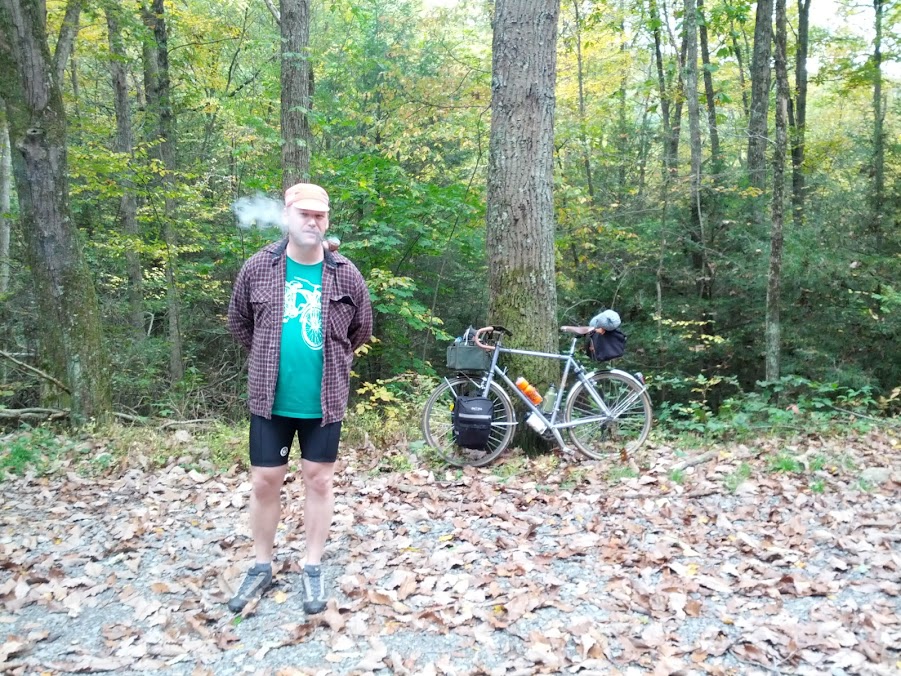 Pipe smoke and spandex. What a sight.

We mounted our steeds, and made our way down the trail. This trail is is rough shape. It’s really more like tame double-track mountain biking than a rail trail. Fallen leaves were hiding big rocks, roots, and mud puddles. So, it was a little rougher going than you might expect from a rail trail. But we soldiered on for 8, er 10, er 13 miles or so. (There was some confusion as to how far we were going before turning off into the wilds).

At times, the trail had the look of an infinite tunnel through the wilderness. 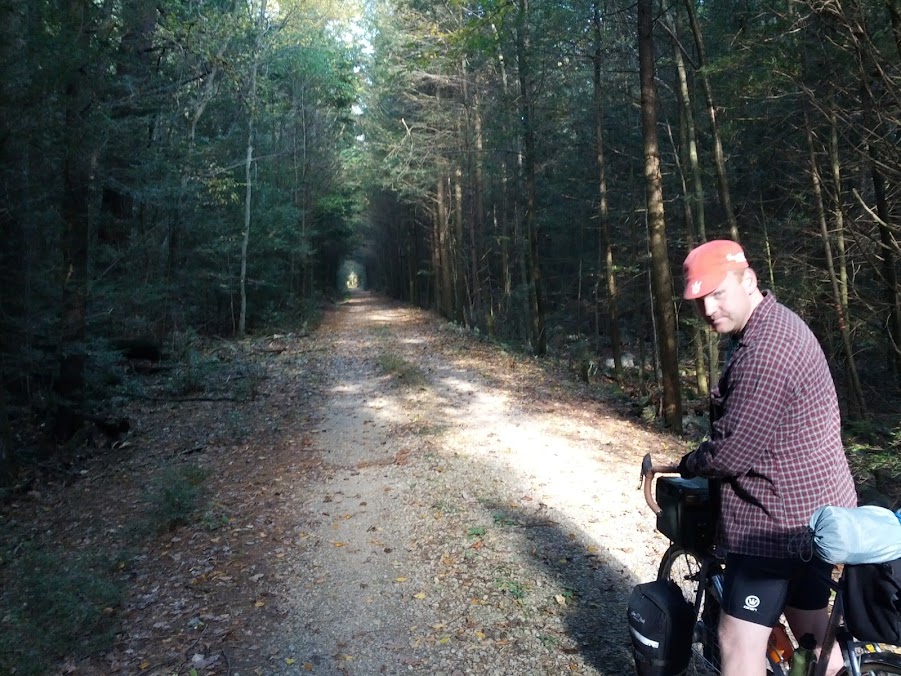 After what turned out to be 13ish miles, we made a sharp left, dismounted and shoved our loaded bicycles up the side of the mountain, in search of the Appalachian Trail Shelter.

We found it, but it was occupied.

So, we kept hiking and found a nice tent site a little ways past the outhouse. The skies threatened rain, but I came prepared with my trusty Quarterdome. 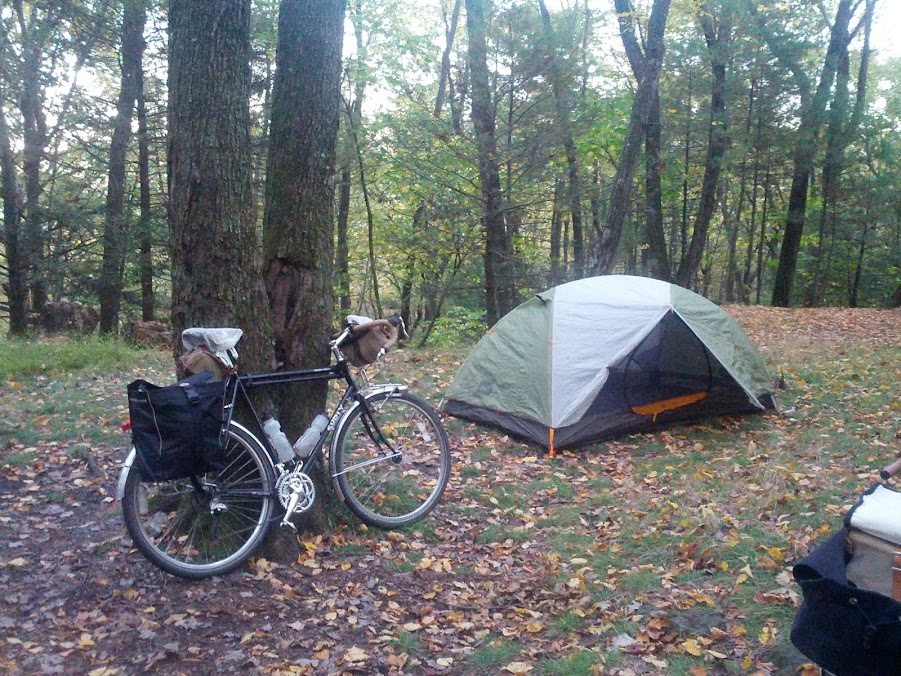 After camp was set, we made some dinner. I brought along some Backpacker’s Pantry Wild West Chili

. I am sorry to report that I can not recommend that anyone eat this stuff. It was foul, but it was all I brought for dinner. I choked it down, not wanting to leave any to attract the bears. 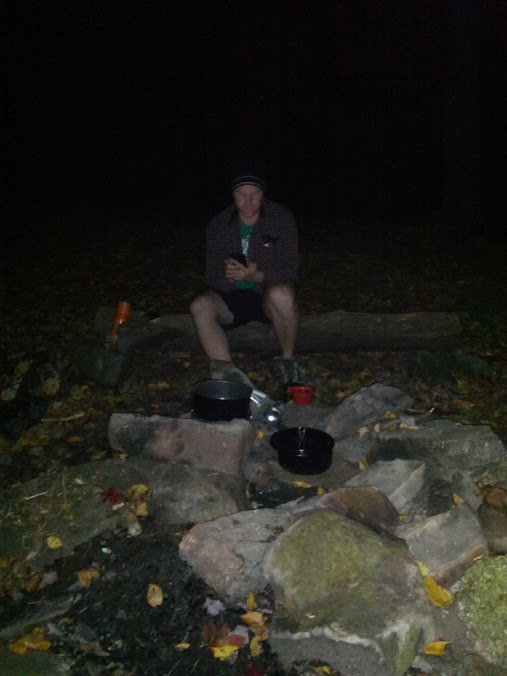 After dinner, we hung the bear bag, and lit a candle lantern. It had to serve in lieu of a camp fire, since there wasn’t much dry firewood about, and neither of us were in the mood to seek any out. 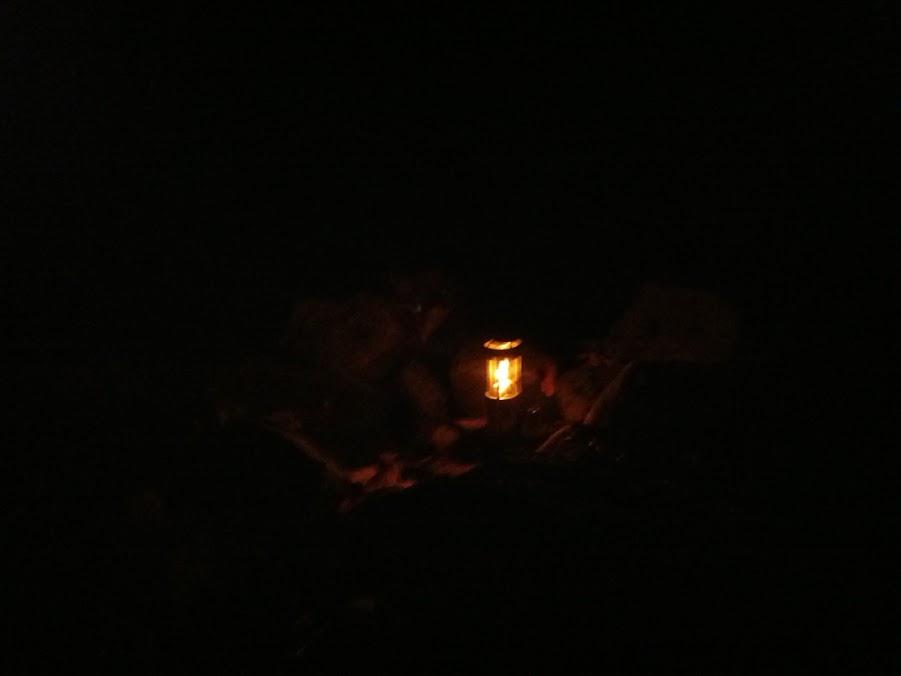 We sat around the candle, and discussed many topics of great interest to learned gentlemen such as ourselves (politics, bicycles, etc). All the while, I was swelling up with an epic, legendary case of chili-induced flatulence the likes of which the world has never seen.

It didn’t take long before we decided to call it a night.

I slept quite comfortably in my tent. I was inconveniently forced out into the bracing night air numerous times during the night to make water. I suspect it had something to do with the 1600mg of sodium I had with my dinner.

Every time I woke up, I was convinced that I was directly down-wind from the AT outhouse, but it eventually dawned on me that I, myself was the source of the offending aromas. I opened the ridge vents in my rain fly. Thereafter, I was able to sleep peaceably until morning.

After morning coffee, Sloth attempted to fry bacon over a pepsi-can stove. Frying things is generally not considered to be one of the use-cases for a pepsi-can stove, but it actually worked out pretty well. I sampled a slice of the bacon, and can vouch for the efficacy of this technique.

Of course, frying bacon leaves bacon fat, and what better use for bacon fat than the poaching of eggs? 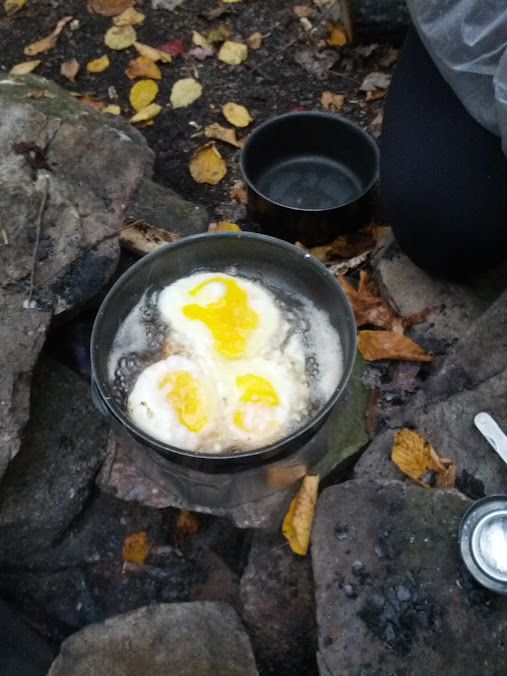 All this, over a simple pepsi-can stove! Amazing.

Shorty thereafter, in acute digestive distress, I took refuge in the AT outhouse. While there, with plenty of time to sit and meditate on deep and profound thoughts, it occurred to me that my approach to mountain cookery might be misguided. Freeze-dried astronaut dinners might not be the best plan, after all.

This matter will require further study.

In any event, the rest of the trip went more-or-less as planned. We rode back to the trailhead in a chilly drizzle, drove to five guys, and stuffed ourselves silly on burgers and fries.

It was a good trip, despite the rain, cold, digestive difficulties, etc. This is our fifth year of doing this trip, and I suspect we’ll do it again next year, too.