Using my shady connections in the internet underworld, I have acquired an auspicious domain name, and I have decided to move this blog over there. Update your bookmarks or whatever to:

I have already copied all your favorite blog posts over there. Many have been digitally re-mastered and feature tons of behind-the-scenes bonus footage, alternate endings, and director’s commentary.

I’ll keep this domain up and running for a while, but all the good stuff will be over there from now on.

If you are following me via RSS, you might want to subscribe to a specific feed, as I am planning to broaden the topics I write about.

You get the idea.

A week or so ago, I was looking at maps, trying to plan out possible adventures to the West of my house, since my standard loop is getting a little stale.

I found a tiny little road that dead-ended in a farmer’s field. The road is called Dutch Cemetery Road.

I flipped over to satellite view, and wouldn’t you know it, it looks like it dead-ends in some ancient cemetery. 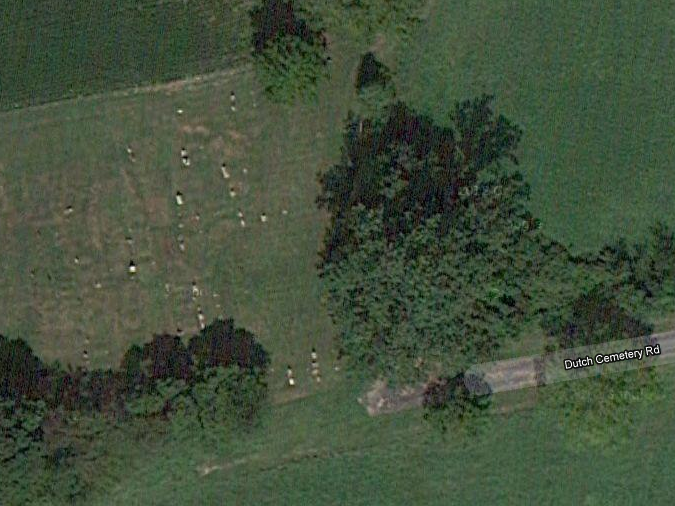 So, Sloth and I decided to ride out there to what there was to see. 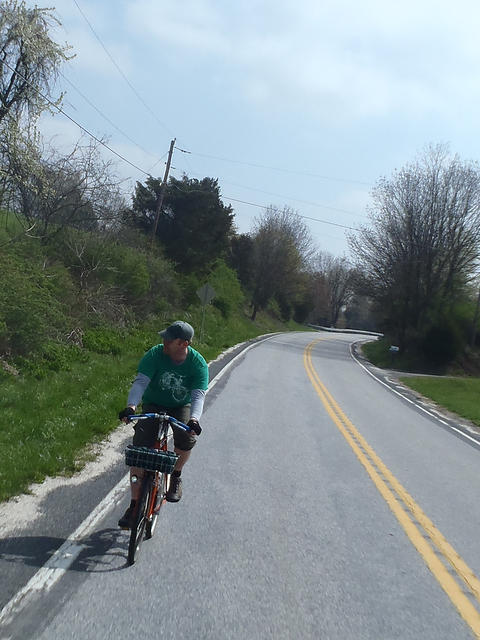 And up and down more hills.
We rode down scenic country lanes with evil, evil steep hills on them. 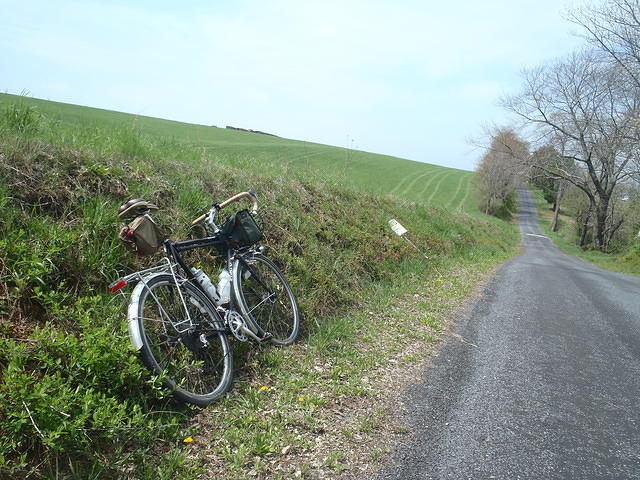 And, we found the old Dutch Cemetery. It was very spooky. All the tombstones were sinking into the ground in random directions. 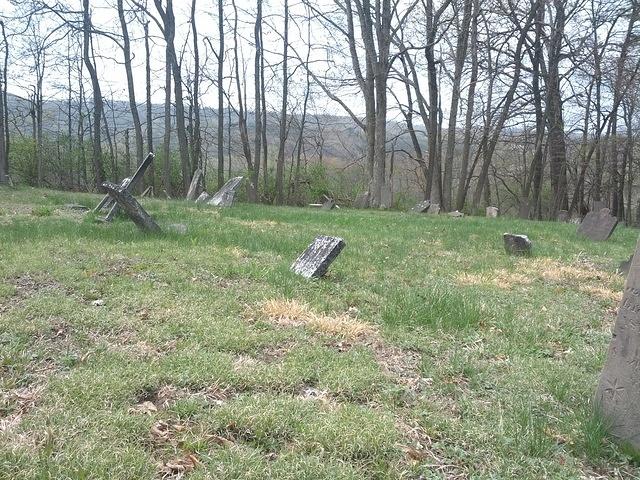 After we took some pictures and ate some snacks, we rode back to my house. A hilly 21 miles all together. My legs are sore, but it was a fun ride

There are more photos in the Gallery, but be warned; they are all very spooky!

I downloaded phpMyGPX yesterday afternoon. I was up most of the night studying the code. I’m not a very good programmer, but it seems possible that I might be able to modify phpMyGPX into what I’m looking for.

I’ve got a crude prototype of a ride report up and working.

I’ve been doing some armchair mapping of the West Shore area for OSM.

The whole area is a gigantic clusterfuck of sprawling housing developments and go-nowhere roads. It’s easy to get lost in there, and have your 10 mile bike ride turn into a never-ending marathon of dead end roads, cul-de-sacs, and near misses by Volvo driving soccer moms.

Once I get it all mapped, maybe I’ll put together a “bicycling guide to the West Shore”. I know I could have used one when I started out.

I have noisy coworkers, and so I listen to podcasts while I’m at work to help keep my sanity. Today, I was listening to old episodes of the the Thomas Jefferson Hour.

The episode I was listening to talked about Poplar Forest, which was Jefferson’s second home / retreat. Today it’s sort of a museum, and I noticed that it wasn’t yet added to OSM. The Yahoo images weren’t very good, but I could see the building, and I knew from the podcast that it was an octagon with a long rectangle sticking out the side.

So, I drew a crude octagon, then told JOSM to arrange the nodes in a circle. I think it came out pretty nicely.

Some time ago, I added a node for Monticello to the map, so now you can plan your Jeffersonian vacation with OSM.

I think Mr. Jefferson would like Openstreetmap. After all, he commissioned Louis and Clark expedition to map the American West.

I’m pretty sure he would have been in favor of share-alike licensing, too.

He who lights his taper at mine, receives light without darkening me. That ideas should freely spread from one to another over the globe, for the moral and mutual instruction of man, and improvement of his condition, seems to have been peculiarly and benevolently designed by nature, when she made them, like fire, expansible over all space, without lessening their density at any point, and like the air in which we breathe, move, and have our physical being, incapable of confinement or exclusive appropriation.

No doubt if Alexander Hamilton were alive today, he’d own stock in Navteq, plan his travels on Bing, and call us all “intellectual voluptuaries.”

This is how big the BP oil disaster is. There’s a website where you can move the oil spill over a map of your city to give you a better sense of scale.

I own a car. This is my fault.

The other day, one of my coworkers forwarded me a link to an article on TechCrunch about OpenStreetmap.

For a moment, I was exited to see OSM getting some press. My excitement faded rapidly, when I saw the article made a rather glaring factual error. It claimed that OSM is a product of Cloudmade.

Sloppy journalism is nothing new, and nothing to get overly excited about. In the comments, a few people tried to correct the mistake, pointing out that OSM is a project in it’s own right, and Cloudmade is a company that uses the OSM data.

Mr. Arrington replied to these comments that he “fully understand[s] the relationship between Cloudmade and openstreetmap.” Clearly he does not.

To say that Cloudmade is in charge of OSM is an error of the same magnitude as saying that Canonical is in charge of Debian. It’s totally ridiculous, and anyone who spends 10 minutes poking around the web could have figured this out.

Arrington then goes on to insult the entire readership of TechCrunch:

“for the vast majority of our readers [the relationship] just isn’t relevant.”

Evidently the difference between the actual facts and made-up malarkey is not relevant to the TechCrunch readership. Maybe TechCrunch is the high-tech equivalent of the Onion, I don’t know.

Not content to insult his own readers, he goes on to slag off the entire open source universe.

If even 1% of our readers gave a damn I’d write a post explaining how projects like these are able to stay on track, and why there is always just one for profit company guiding it.

Evidently he thinks that open projects alway have a for-profit company behind them. I’ve been an active contributer to OSM for over three years now, and I’ve never once been “guided” by Cloudmade in any way whatsoever. Does anyone know what for-profit concern is “guiding” Wikipedia or Mozilla? I sure don’t.

After several more comments tried to correct Arrington’s mistake, he decided that the OSM community is “nasty” and closed down the comments.

Well, sorry TechCrunch. We’re open source people. When we see a mistake, we file a bug. We tried to help you fix your buggy article. It’s what we do. You didn’t listen, and so your article is still broken, and you look like a fool.

The Atlanta Citywide Mapathon made the news! Openstreetmap is now one step closer to world domination.

I was driving around Lemoyne the other day, and I noticed that PennDot has put up signs for a new BikePA bicycling route.

So, I turned on the GPS and followed the signs to see where they went. The route goes almost the whole way to Gettysburg, connecting Route J with Route S.

PennDot hasn’t updated their maps in ages, but OpenCycleMap always delivers the goods.

Once you get out of Mechanicsburg, it’s a very scenic ride. It runs for about 30 miles through farms and apple orchards. There are a couple of enormous hills, so be sure to wear comfy shoes for pushing your bike uphill.

Here’s a GPX file of the route, in case you’d like to put it in your GPS or mapping software.

The other day, I saw on Doc’s blog that the LVRT finally got completed to Lebanon.

So yesterday, I went out to scope the new trail. I parked at the trailhead in Cornwall and rode to the point where the trail used to end, but it didn’t end. It went over the fancy new bridge, and it’s paved(!!!) all the way to 8th st.

Just before the bridge, there’s a new spur trail (also paved) that takes you to South Hills Park.

On the way back, I rode out to the park. It’s a nice park. I found a lovely bench in the shade and sat down to space out and relax for a while.

The trail is eventually going to go to the High School / Middle School, but you can pretty much ride there through the park now.

I gps logged the new parts of the trail, and you can now see the new hotness on OpenStreetMap.

In other news, the new Rail Trail in Lewisburg is coming along nicely, despite grumblings from local yahoos.