Using my shady connections in the internet underworld, I have acquired an auspicious domain name, and I have decided to move this blog over there. Update your bookmarks or whatever to:

I have already copied all your favorite blog posts over there. Many have been digitally re-mastered and feature tons of behind-the-scenes bonus footage, alternate endings, and director’s commentary.

I’ll keep this domain up and running for a while, but all the good stuff will be over there from now on.

If you are following me via RSS, you might want to subscribe to a specific feed, as I am planning to broaden the topics I write about.

You get the idea.

Yesterday was the first warm day in as long as I can remember. I wanted to ride bicycles, and Sloth said he did too. So, we rode our bicycles from Middletown to Bainbridge and back.

We stopped to take pictures of the Three Mile Island power plant.

As we got closer to Bainbridge, we saw signs for the historic Haldeman Mansion. We detoured a bit to check that out.

On the way back, we came upon Shady’s BBQ, so we decided to stop for lunch. This was the best idea we had all day. I heartily recommend the horseradish cole slaw.

Now that we had bellies full of pig, continued our journey. We found a really creepy old stone building that was falling apart. We stopped to take some pictures.

Our route took us past Falmouth, home of the world famous Falmouth Goat Races.

I added the Haldeman Mansion and Shady’s BBQ to OpenStreetmap.

I made a few New Year’s Resolutions last year. Let’s see how I did:

Riding:
All things considered, 2013 was a very good year for me and my bicycle. I rode over 1700 miles, besting my goal of 1500, and setting personal records in damn near every category. I finally rode my first metric century, with a lot of climbing, and while heavily laden with camping gear.

Reading:
I made steady progress with the Harvard Classics, and read several other books besides.

I’m following the “History of Civilization” reading plan through the Harvard Classics. This plan starts you in Ancient Egypt and you work your way forward through time. I made it through Herodotus, Homer, interminable Greek drama, Plato, and Plutarch. I am now at the beginning of the Roman Republic, which puts me about 15% of the way through the entire Harvard Classics.

Onwards to 2014:
Right. so, what do I want to accomplish this year?

There are 14 old covered bridges still standing in Perry County. Using my advanced OpenStreetMap Kung-Fu, I have begun work on a map of them.

I rode out and found one of them a few weeks ago. (Yes, I’m a little behind on my blogging.)

Perry County has a lot of hills, but the scenery is worth the effort.

It was about 16 miles from my house to the bridge.

This is what the inside would look like if your eyes were on the sides of your head like a cow’s are.

When you come out the other side, there is a little picnic area. I stopped here and had my lunch before riding back home. 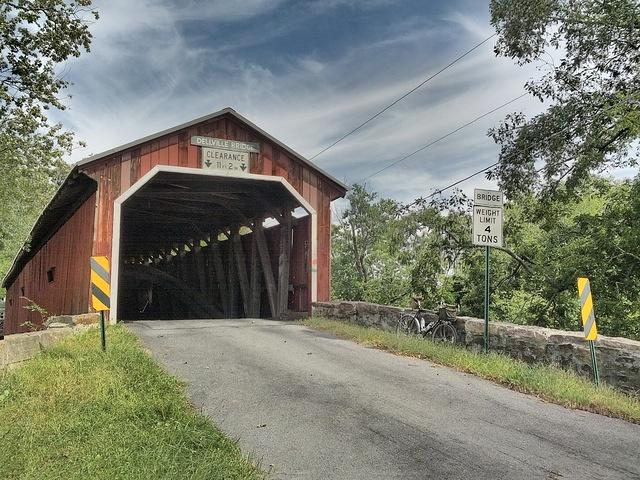 …When we last saw our hero, he was flat on his back, snoozing peaceably in the forest, wondering how he would ever summon the strength to ride his bicycle all the way back home, over hill and dale…

Morning found me in my tent. When I crawled out to attend to biological necessities, I noticed that my legs were a little sore, but not so bad as I expected after yesterday’s epic battle against the hills.

Maybe today would not be such a disaster after all.

I boiled some water for coffee, and soon the other bike hobos were up and about.

Before there is any breakfast, or any packing up of camping gear, or any conversation, there must be coffee.

I made Starbucks Via (instant) coffee, and it was pretty much OK. Sloth had some sort of drip filter, and made real coffee. I believe the bike hobo was also rocking the Starbucks instant.

I had a ton of cardio to do today, so I threw gastrointestinal caution to the wind, and ate two whole packets of instant oatmeal for breakfast. Shortly thereafter, someone started cooking bacon, and caused me to reconsider my entire nutritional regimen.

After breakfast, we broke camp, strapped all our junk onto our bicycles and made ready for departure.

We bid a tearful adieu to the bike hobo, and headed back to Harrisburg. Or at least we headed in a northerly direction. We hadn’t actually bothered to chart much of a course.

We looked at the google maps app on our phones, and hoped / guessed, that PA route 94 would give us a direct, flattish way home.

94 turned out to be a fairly major road, with no trees to shade us from the wicked day star. The hills were less traumatic than the ones the day before, but the traffic was horrific. We considered abandoning the road due to traffic, but kept plodding on. I do not recommend riding your bike on PA94, unless you have nerves of steel, and can hold a razor-sharp line. I don’t have any pictures of this part of the ride, because I was too busy trying to hold my line to mess with the camera. It wasn’t a great route, but we survived. We got off 94 somewhere outside of Dillsburg.

It was hot outside. The sun was roasting us alive, and we were almost out of water. We tracked down a gas station, where we refilled our bottles with water, and our bellies with Gatorade and ice cream.

I was starting to crack, but we only had 15 miles to go, and we were almost back to familiar roads. So, we powered on. We stopped for one last rest stop / photo op just outside Mechanicsburg.

We arrived back at our starting point to discover that Mrs. Sloth had locked Mr. Sloth out of the house. I was sympathetic, but I had my own Mrs. waiting for me at home — with food. So, I took my leave. On the drive back to my house I pondered the day’s adventure.

We had made it, and the Man with the Hammer did not totally destroy me like he did the day before. I attribute this to the following factors: